All Collections
People
Basics
How support status is determined

How support status is determined

Every profile in your database has a support status: supporter, non-supporter, or prospect, which can be edited as people interact with you.

Written by Jay Godfrey
Updated over a week ago

📌 Note: Text messages are available as add-ons. For more information on adding new features please see the add-ons page in your nation.

A person whose support level is "3 - Undecided," can be a supporter, prospect or a non-supporter.

It may be confusing that people with support level 3 - Undecided are not always prospects. The "prospect" support status is primarily used to gather people who have neither opted in nor opted out of email communication from your organization.

You can edit support level:

Defining the support level for each profile can be tedious, so we have an automated process will approximate support status when support level doesn't exist. Support status primarily distinguishes between people based on whether or not they have opted into mass communication. Non-supporters will never be included in mass communication (however, you can communicate one on one with anyone in your database). Text message blasts can only be sent to supporters. You can send email blasts to supporters or to prospects.

If a person does not have a support level, the actions they have taken will be used to determine their support status.

These actions make prospect or non-supporter become a supporter:

These action make a supporter become a non-supporter:

Donors, volunteers, members, and fundraisers will remain supporters if they unsubscribe or unfollow. Similarly, if someone is subscribed to email blasts, that person will remain a supporter even if they unfollow a broadcaster on Twitter.

These actions will bring someone into your nation as a prospect:

During a one-time import, a decision needs to be made whether the import includes supporters / non-supporters or prospects.

If the records being imported are people who have opted into communication, select Supporters / Non-supporters. Any new profile created with an email address, mobile phone number, Facebook username/ID, or Twitter login/ID will be labeled a supporter. New profiles imported without one of these elements--email address, mobile number, Facebook, or Twitter--will be labeled non-supporters.

If the records being imported are people who have not opted into communication, select Prospects. When prospects is selected, all profiles created will be labeled prospects, including records with email address, mobile number, Facebook username/ID, or Twitter login/ID.

When records are imported with support level and opt-in status, the above rules will not apply.

Records imported with the following will always be supporters:

Records imported with the following will always be non-supporters:

Support level is more important than opt-in status. For example, if a record is imported with support level = 4 and email opt-in = Y, the profile created will be a non-supporter.

One-time imports updating existing profiles may change the support status on those profiles. The expectation is that the first goal of engaging prospects is to determine whether they are supporters or non-supporters. The status will be applied to new people through your import, but will not update existing people unless the box is checked to overwrite data.

A new profile created during a donation import will always be a supporter, unless the record includes support level 4 or 5.

Similarly, a new profile created during a membership import will always be a supporter, unless the record includes support level 4 or 5.

New profiles created during a voter file import will always be prospects, unless the records includes support level.

Edit support status in a profile

Since supporters know about an organization and prospects do not, a supporter can only become a non-supporter. You aren't able to change supporters into prospects.

Here are some examples -

Maria was added to the database when a broadcaster retweeted one of her tweets. That action made her a prospect. When I edit her profile, I can change her support status to non-supporter. I could also edit her support level. 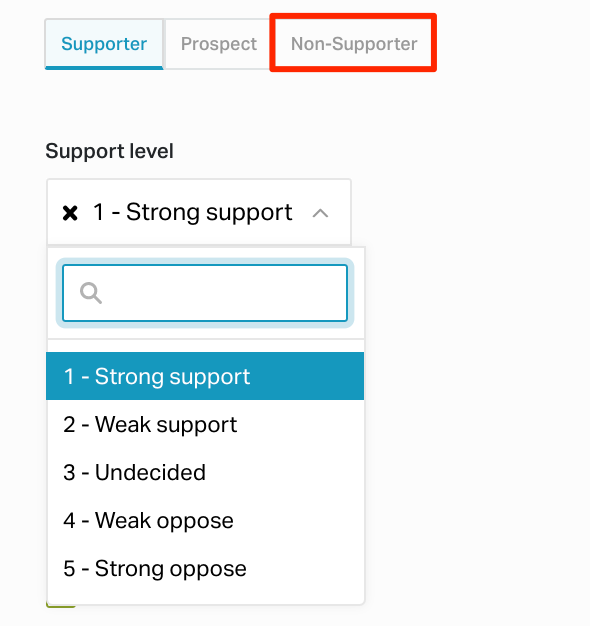 On the other hand, Anneke was added to the database when she followed a broadcaster on Twitter. That action made her a supporter. When I edit her profile, the only way I can make her a non-supporter is by editing her support level. 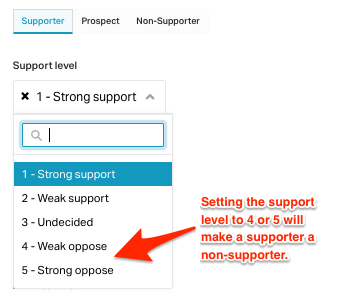 Since Anneke is following a broadcaster on Twitter, she cannot be labeled a prospect because she knows about the organization. Her support level can be updated to "3 - Undecided." 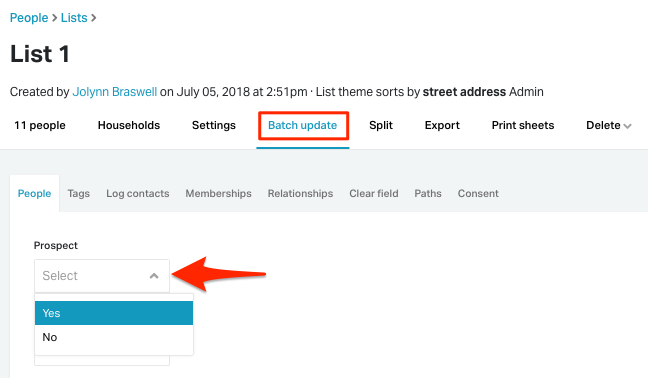 A list of people can be batch updated to Prospect = Yes or Prospect = No.

If I batch update a list with Prospect = Yes, the following happens:

If I batch update a list with Prospect = No, the following happens: