Set up your election

Robust campaign tools are built into your nation. To take full advantage of these features, you'll want to first set up your election.

📌 Note: Features mentioned this HOWTO are available as an add-on. For more information on adding new features please see the add-ons page in your nation.

Where to start (enable voter features)

In your control panel, when you go to Settings, you should see a Political option.

If there is no political option under Settings, go to Settings > Defaults > Basics and check the box next to "Enable voters." Then click the Save settings button at the bottom of the page to save your changes.

To ensure that you see the correct setup options, also make sure your country is set correctly in Settings > Contact.

Setting up your election is the important first step in the process, as several features are built on the information provided here. Go to Settings > Political > Elections.

The election to a single office can be broken up into several stages. Therefore, each time people vote is defined as a separate election. For example, members of the U.S. House of Representatives are elected every two years. For a particular seat, there is a primary election and a general election. Here is how defining elections would look for a candidate in the race for California's 33rd Congressional District: 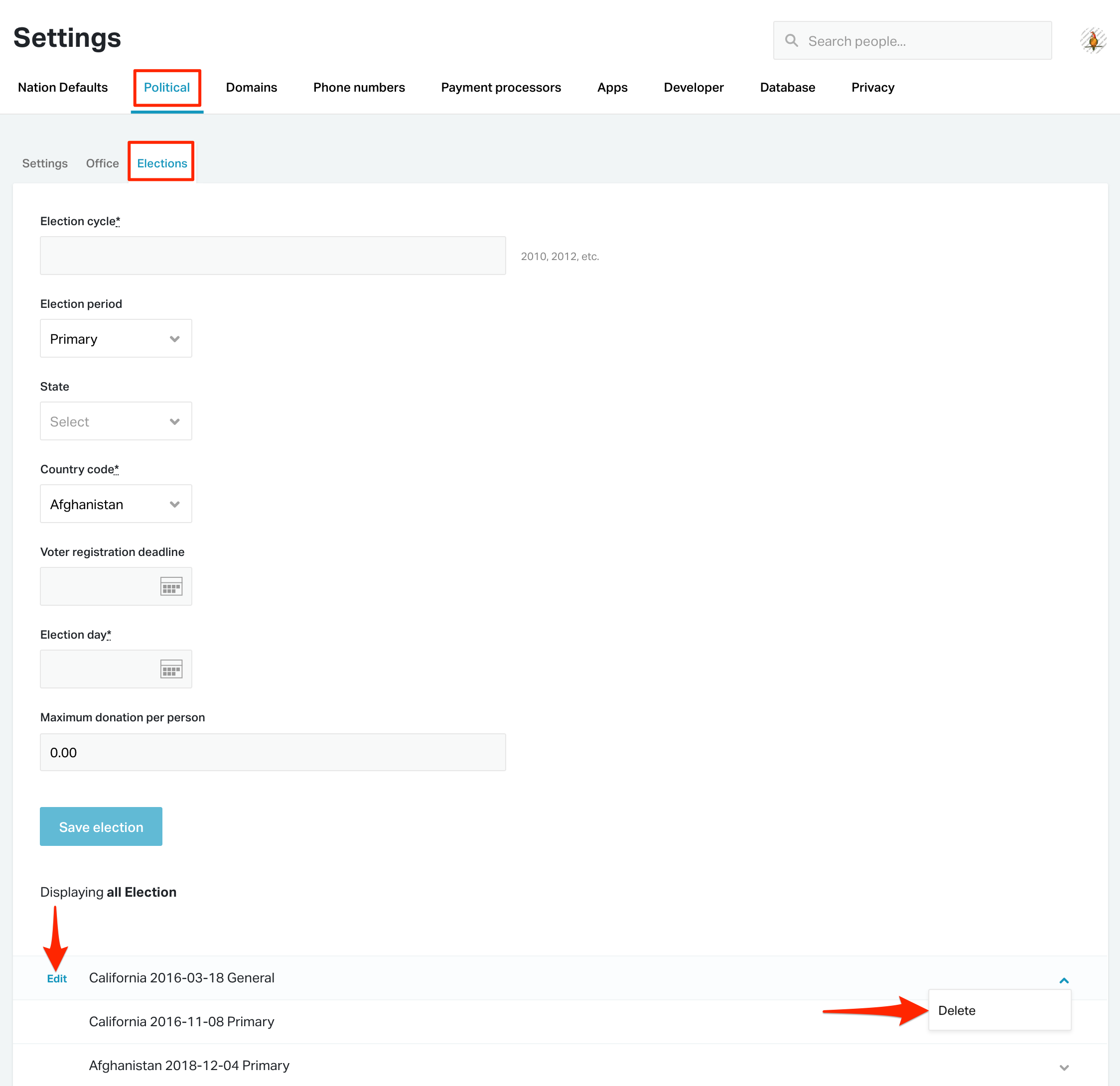 Election cycle: Typically, this is defined as the year in which the final election period occurs, and is a required field.

Voter registration deadline: Click in this field and a calendar will appear to allow you to select the date by which voters much register for your election.

Election day: Click in this field and a calendar will appear to allow you to select the date of your election, and is a required field.

Maximum donation per person: the maximum amount of money a person may donate to your election per the rules governing your election.

Click the Save election button to save your input.

Once you save an election, it will appear in a list on the right side of the page and can be edited or deleted.

Automatic donation splitting for elections within an election cycle

When two elections are created within the same election cycle, donations will be split automatically once a donor reaches the maximum contribution for the first election.

Contributions are always counted toward the current election first. Once the donor reaches the maximum contribution amount, the rest of her donation will be attributed to the upcoming election.

📌 Note: For recurring donations, only the initial transaction is checked against contribution limits. The subsequent transactions are processed directly by your payment processor.

Once you have defined your elections, go to Settings > Political > Settings. Here is where you select the candidate. 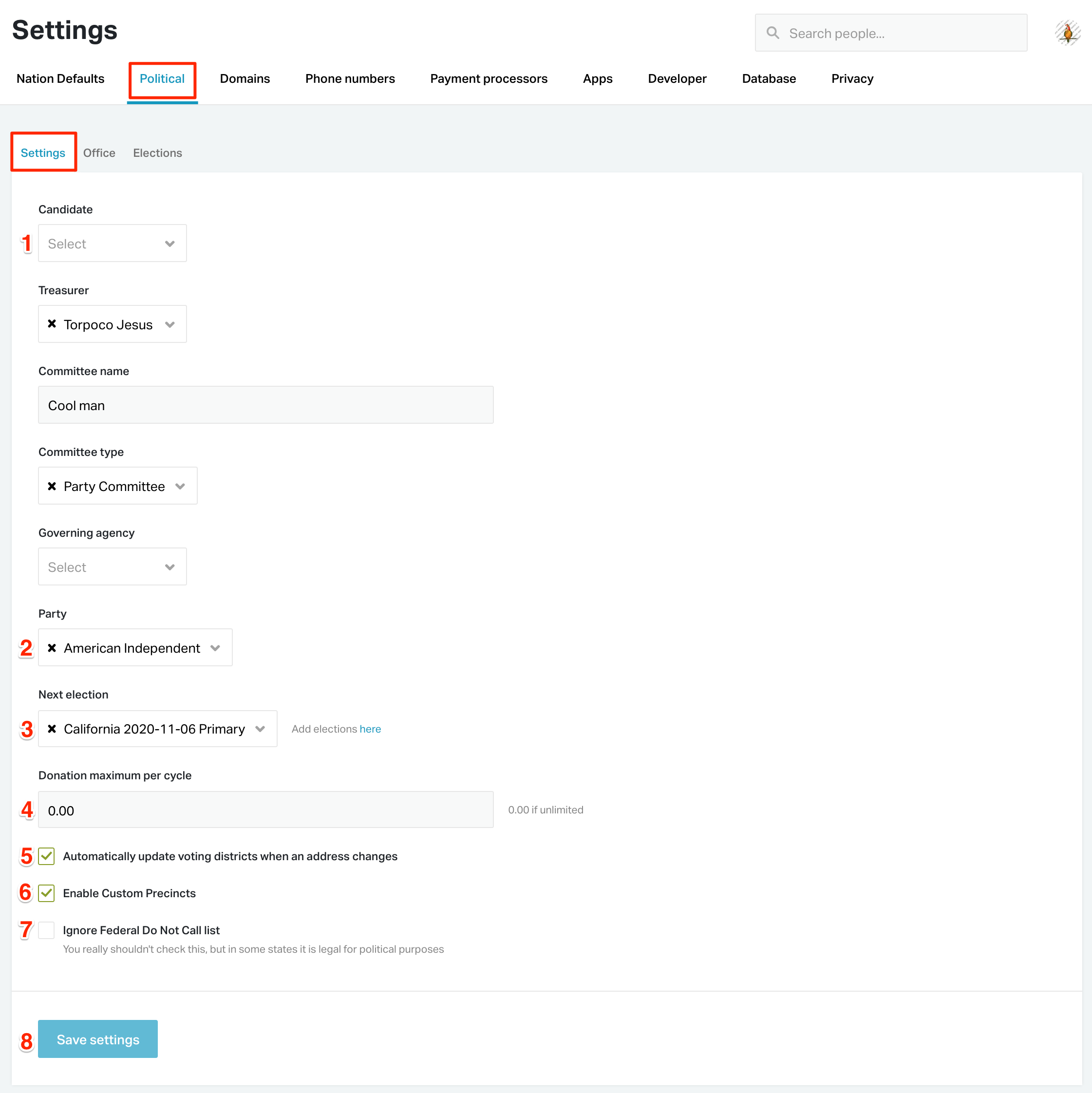 1. Make sure the candidate's name on the profile is as it will appear on the ballot.

2. Next, indicate party affiliation. The party dropdown menu depends on where you are located. There is an FAQ describing location-based party support. Remember to set your country in Settings > Contact.

3. Select the next election.

4. Donation maximum per cycle: this is the total maximum amount a person can contribute in a year. For example, if the individual limit in the 2014 primary election is $2,600 and the limit in the 2014 general election is $2,600 then you should enter $5,200 in this field. That way, any amount contributed during the primary above $2,600 will be designated for your general election. Your donation pages will make these adjustments automatically when you complete the election setup.

1. Create each election in the cycle in Political > Elections.

2. Include the "Maximum donation per person" in each election period.

3. Select "Next election" and define the "Donation maximum per cycle" in Political > Settings.

4. Do not enter a maximum donation amount when creating a new donation page - it will be set automatically based on which election you are in.

5. Automatically update Federal & State Districts when an address changes: We recommend keeping this box checked to allow auto-districting to occur. This is useful for understanding a voter's current district; but may vary from the place where she is registered to vote.

7. Ignore Federal Do Not Call list: We do not recommend checking this box, but in some states it is legal for political purposes to ignore the national do not call registry.

8. Click the Save settings button to save changes you make to this page.

Once you complete the political settings, go to Settings > Political > Office.

Defining the office name and geographic location gives your nation the ability to automatically determine whether new people are eligible to vote in your election. You should only fill out the fields that are relevant to your election.

Here is how the Office area is filled out for Jane Smith, who is running for Congress in California: 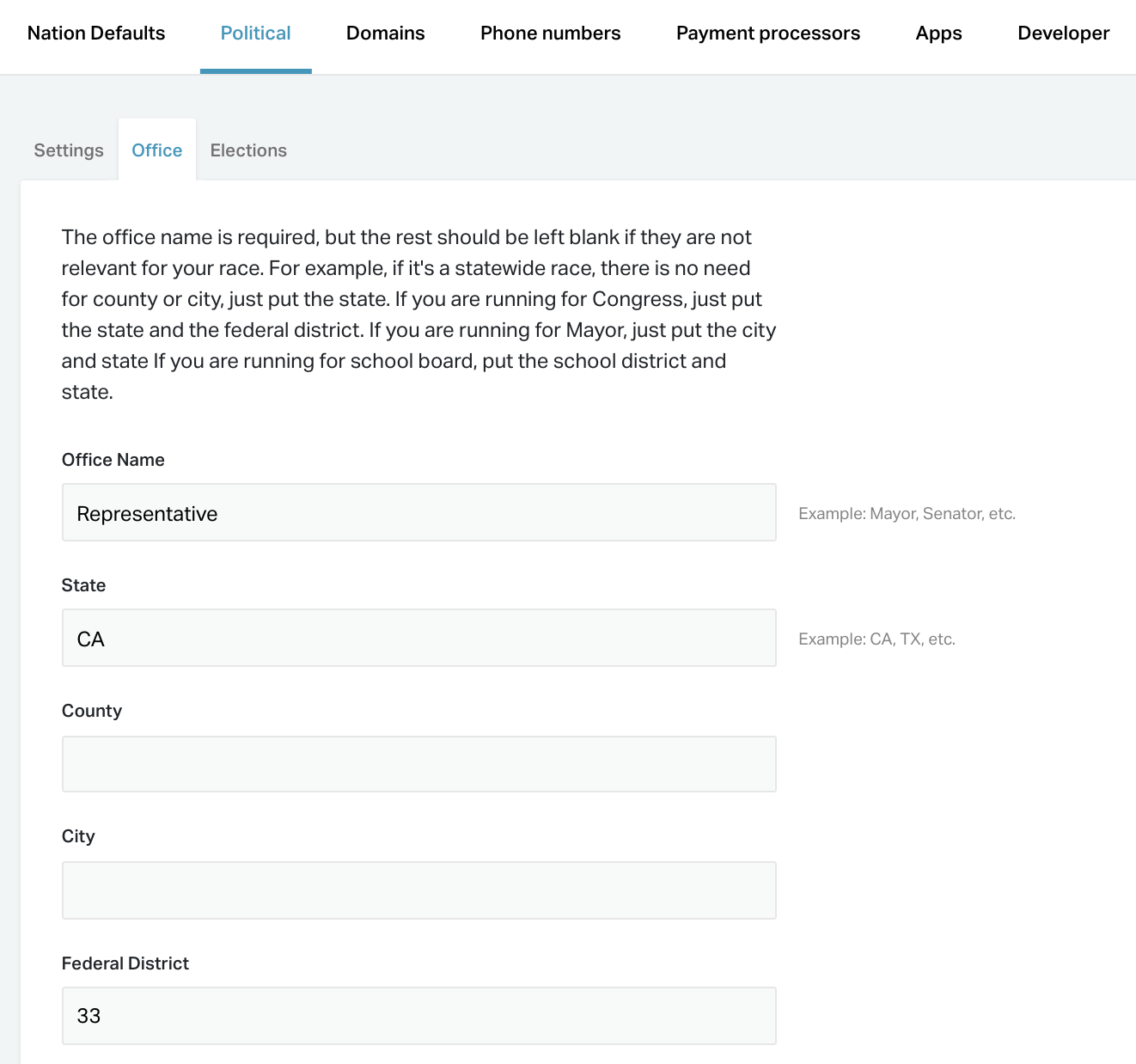