Written by Sally Chou
Updated over a week ago

📌 Note: Groups are currently only available on Enterprise and Network plans. For more information on this new feature, please get in touch with a sales representative.

Groups are collections of CPUs who are responsible for similar types of supporters or job functions within an organization. Lists of people and individual Websites can be assigned to these groups to limit the types of records the CPU has access to in the nation. Groups could be made up of multiple CPUs who have the same role in the organization and are responsible for a large number of supporters (e.g. Volunteer Coordinators), or CPUs with different roles but in a similar region or area of focus (e.g. regional chapters within an organization).

When a list of people is assigned to a group, any CPU who is a member of that group and has “Assigned” or “Everyone” People permissions is able to see those people in the nation. This allows you to distribute ownership of that people-universe to more than one control panel user, something that the Point Person assignment functionality did not allow for. Any new people who are added to assigned lists will be visible to CPU members of the group, and removing people from the list will similarly remove access from the CPU group members.

We’ve extended this “Assignment” concept to websites, and there is a new option in Permission Sets for users to see “All websites”, “Assigned websites,” or “None.” Because all permission sets before allowed access to all websites when Website permissions were granted, the default for this new option is “All websites”. Assigning management of a website to a specific group allows any CPU who is a member of that group and has “Assigned” or “Everyone” Website permissions is able to see those people in the nation. This allows for chapter or group-specific websites to be created, and it prevents people from outside of the group from being able to edit a particular website.

To create your first group, first head to the Control panel users section of the People section, and then click on the “Groups” tab. Here you’ll be prompted to create a new group and give it a name, description, and choose which list or lists that group should have access to. You’re able to change all of these after you create your group, so don’t worry about getting it perfect and feel free to leave the “Description” and “Lists” fields blank. 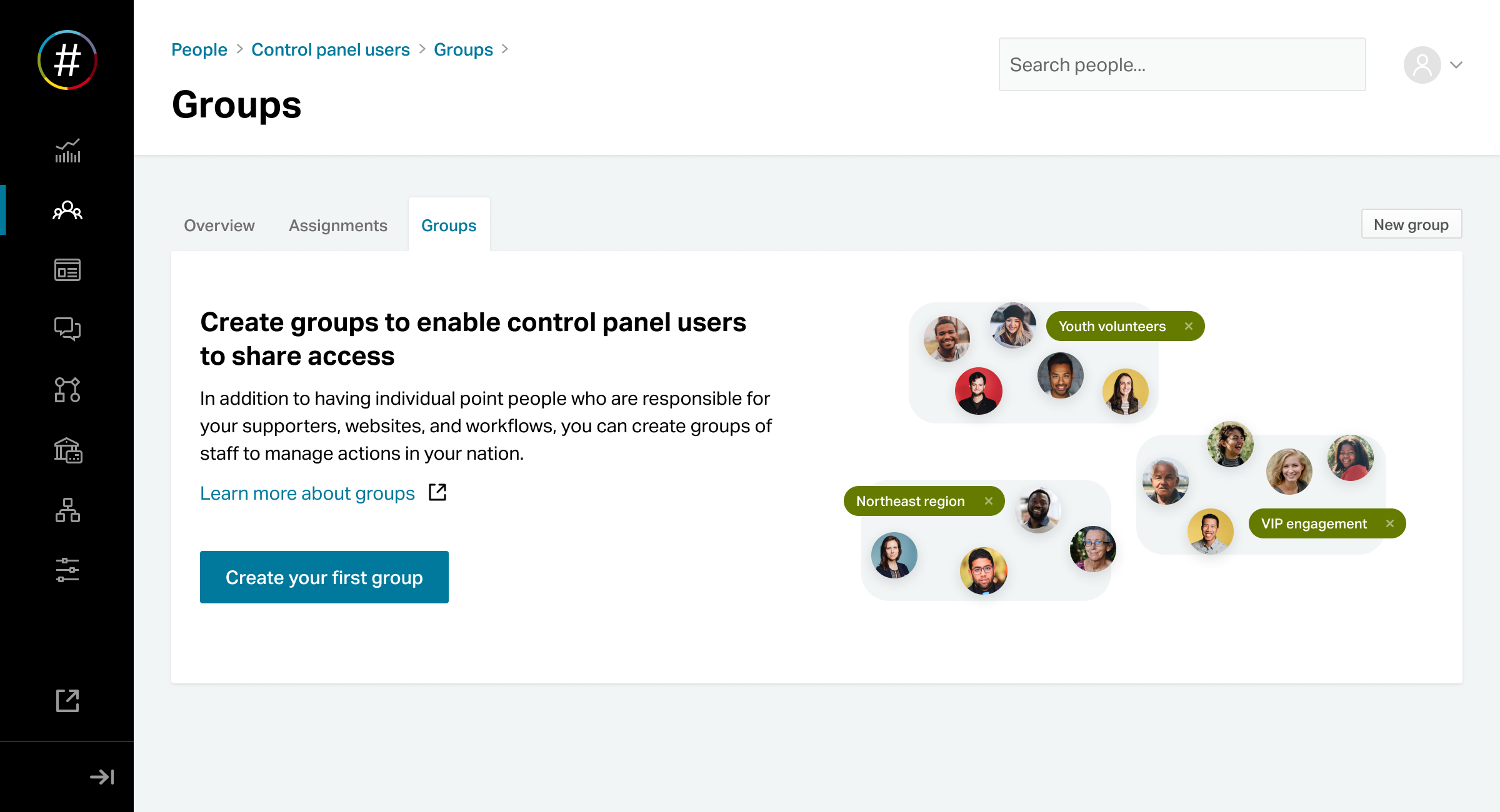 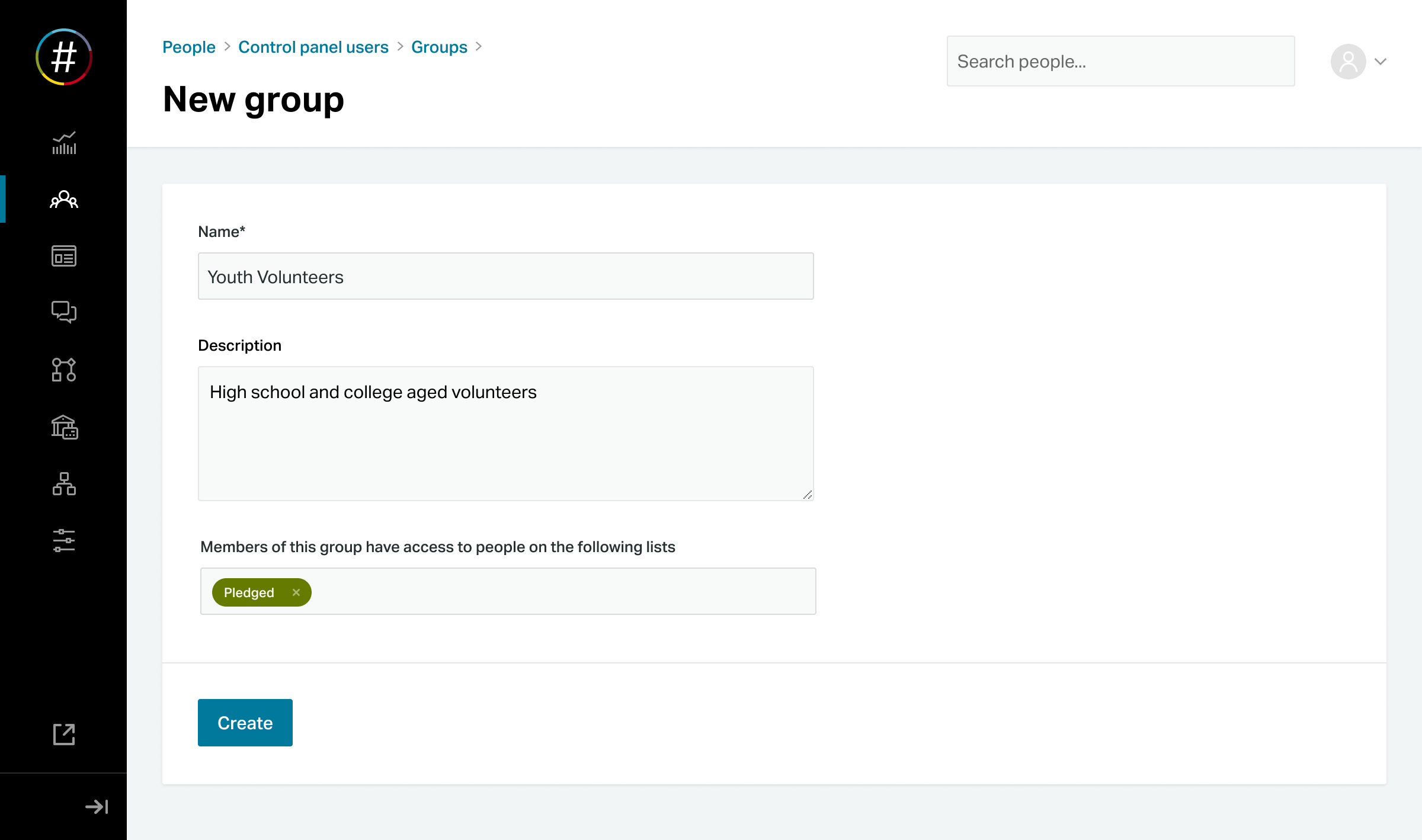 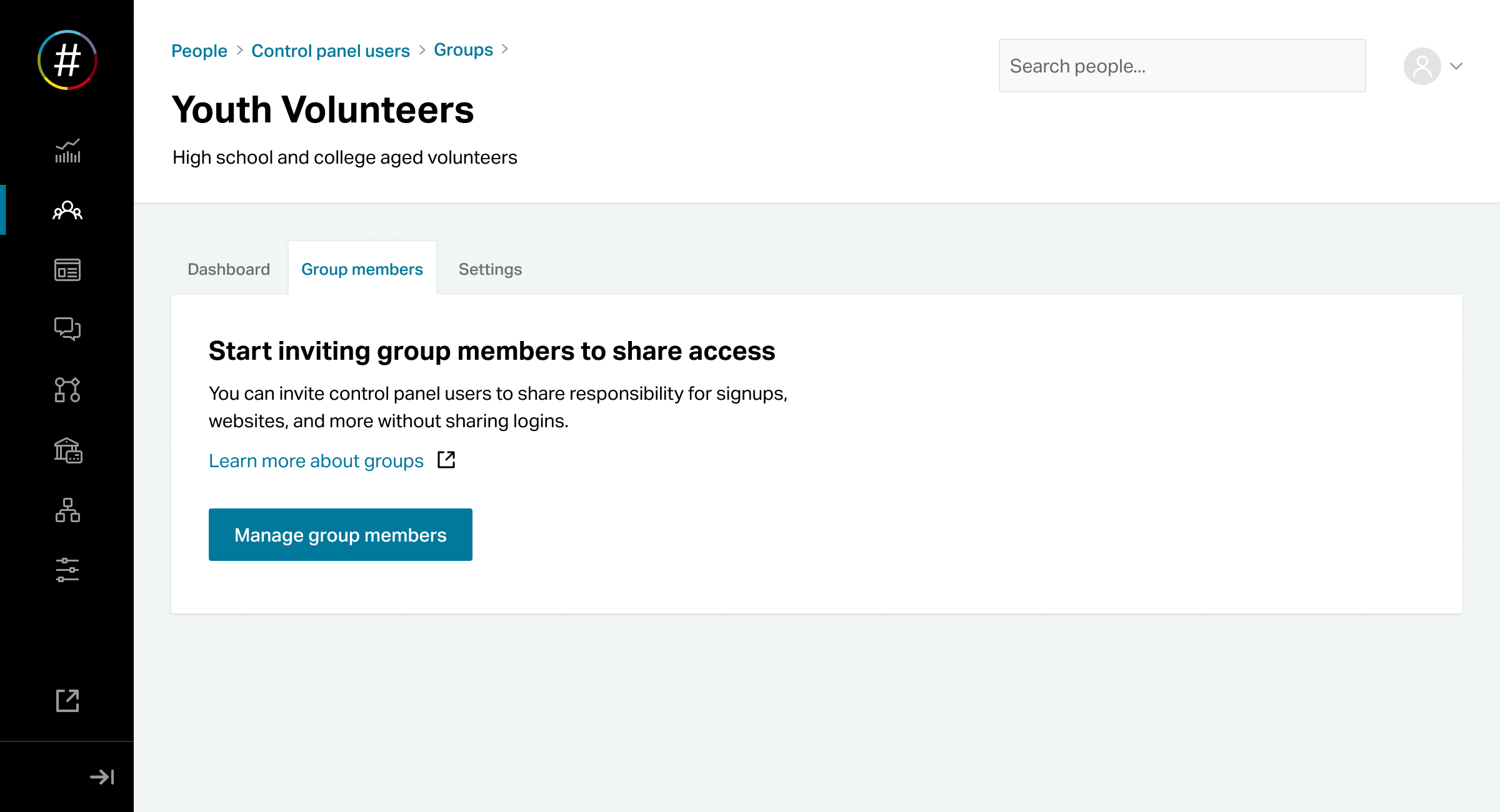 Once a group has been created, use the Manage Group Members button to surface the list of CPUs you can add to the group. Clicking on the name of a CPU will add a check-mark near their name, and clicking “Save” will cause them to be added to the group. 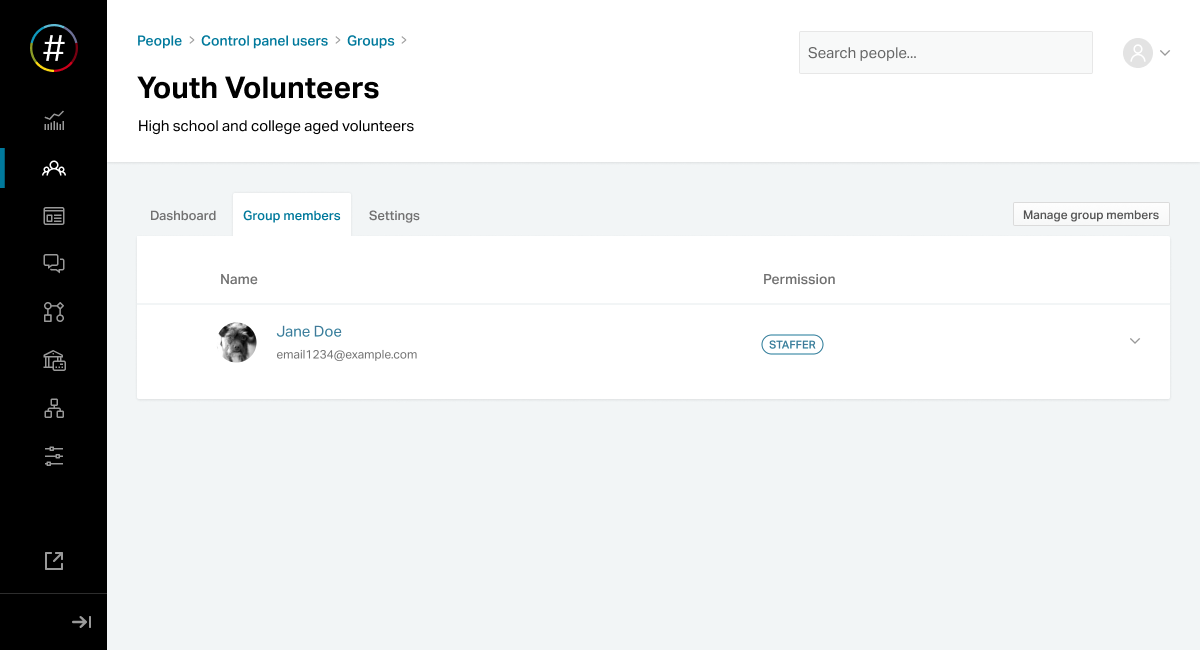 When a CPU is added to a group, the group name will be displayed as a badge on their profile.

You can uncheck the CPUs name in the “Manage group members” form, or you can use the dropdown menu on the right-hand side of the groups listing to remove individual users: 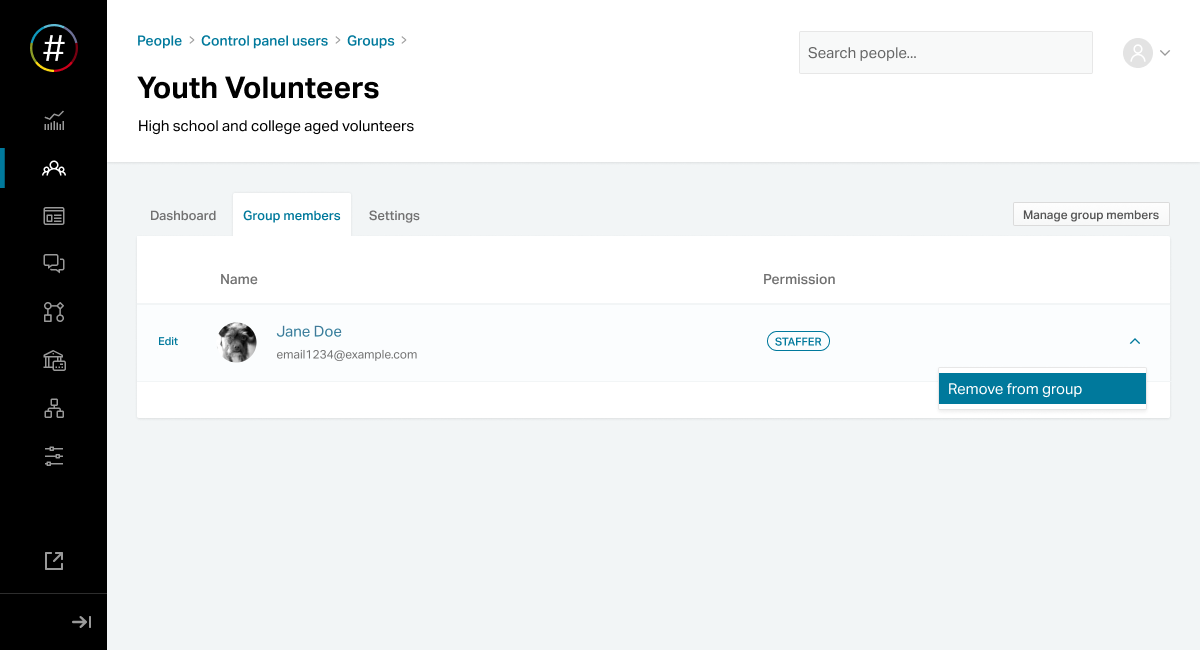 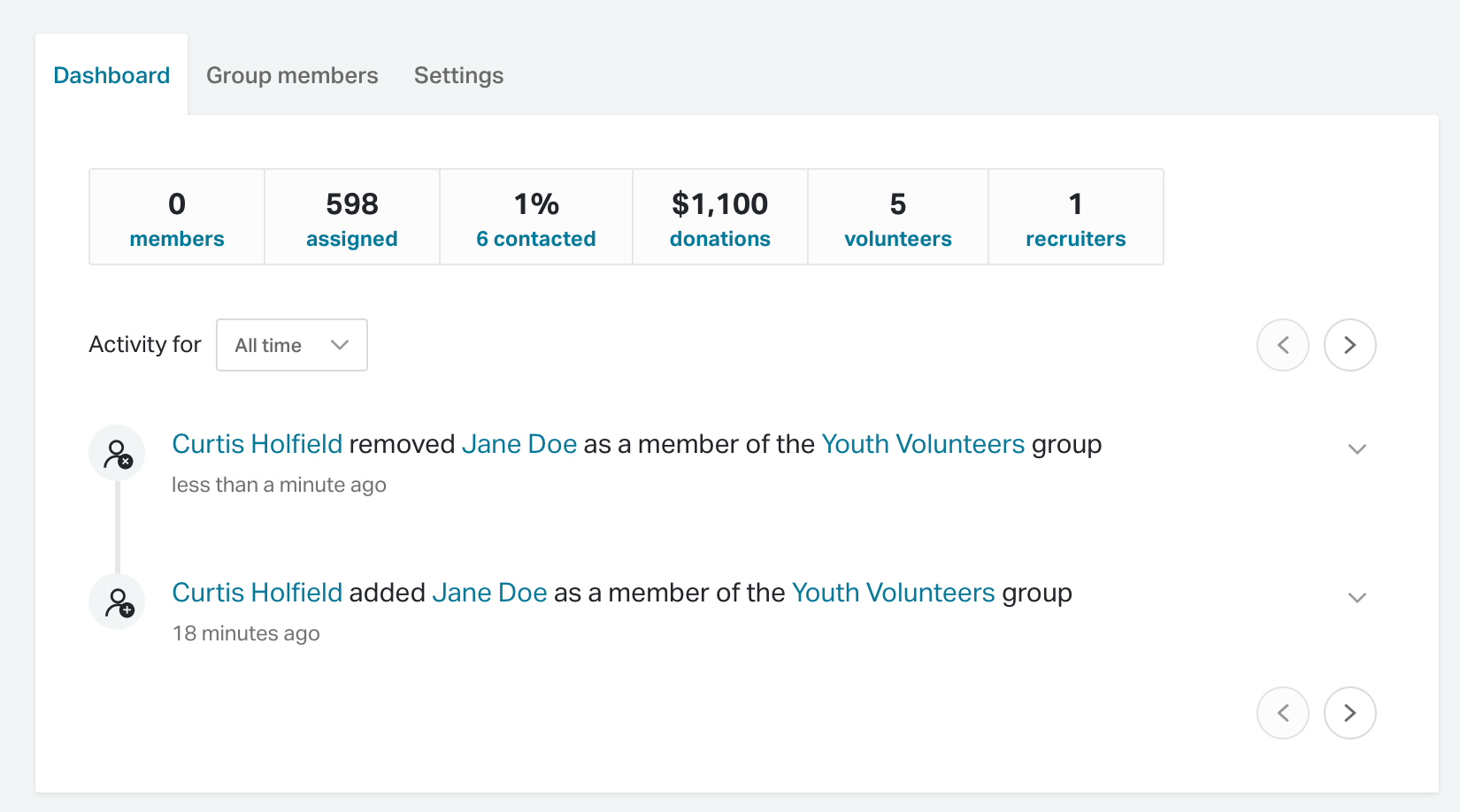 Lists of people that are assigned to the group can be selected when creating the group, but you can also change this after the group has been created by navigating to the Settings tab of the groups view. New lists can be added, existing lists can be removed, and you can associate more than one list with a particular group. 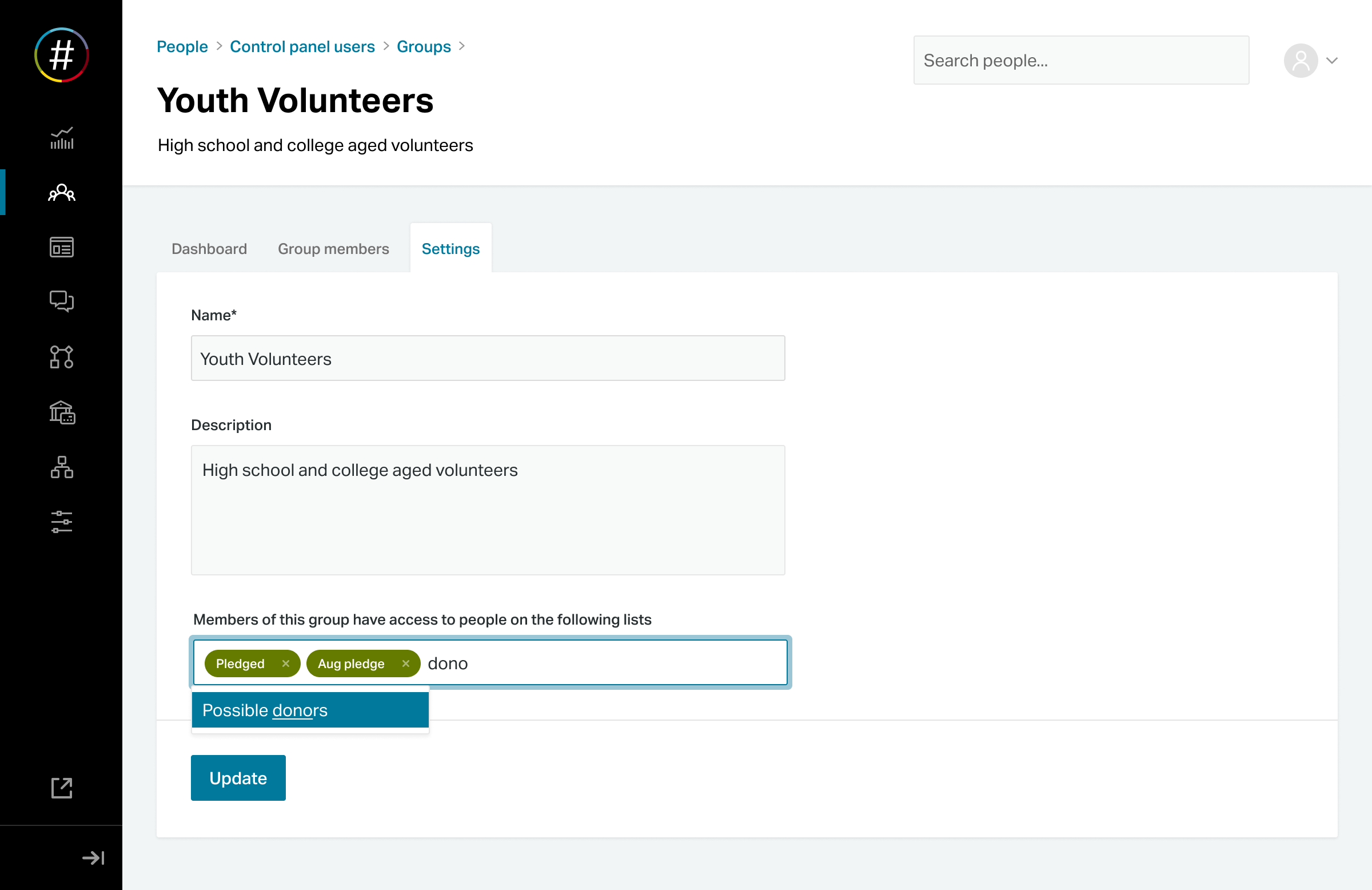 Once a list is assigned to the group, the Dashboard tab of that group will display stats about the assigned people, and a history of which CPUs were added to or removed from the group. 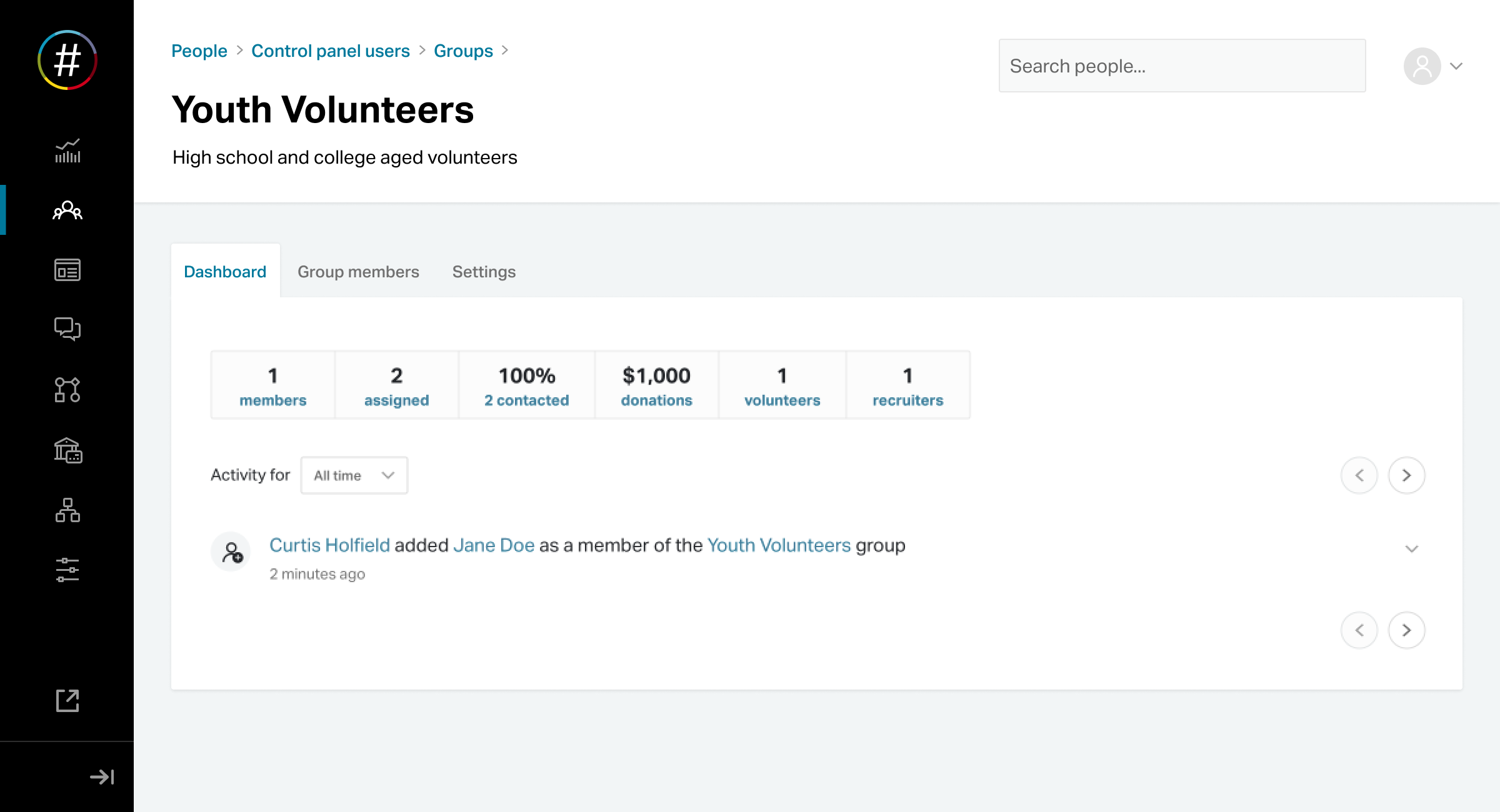 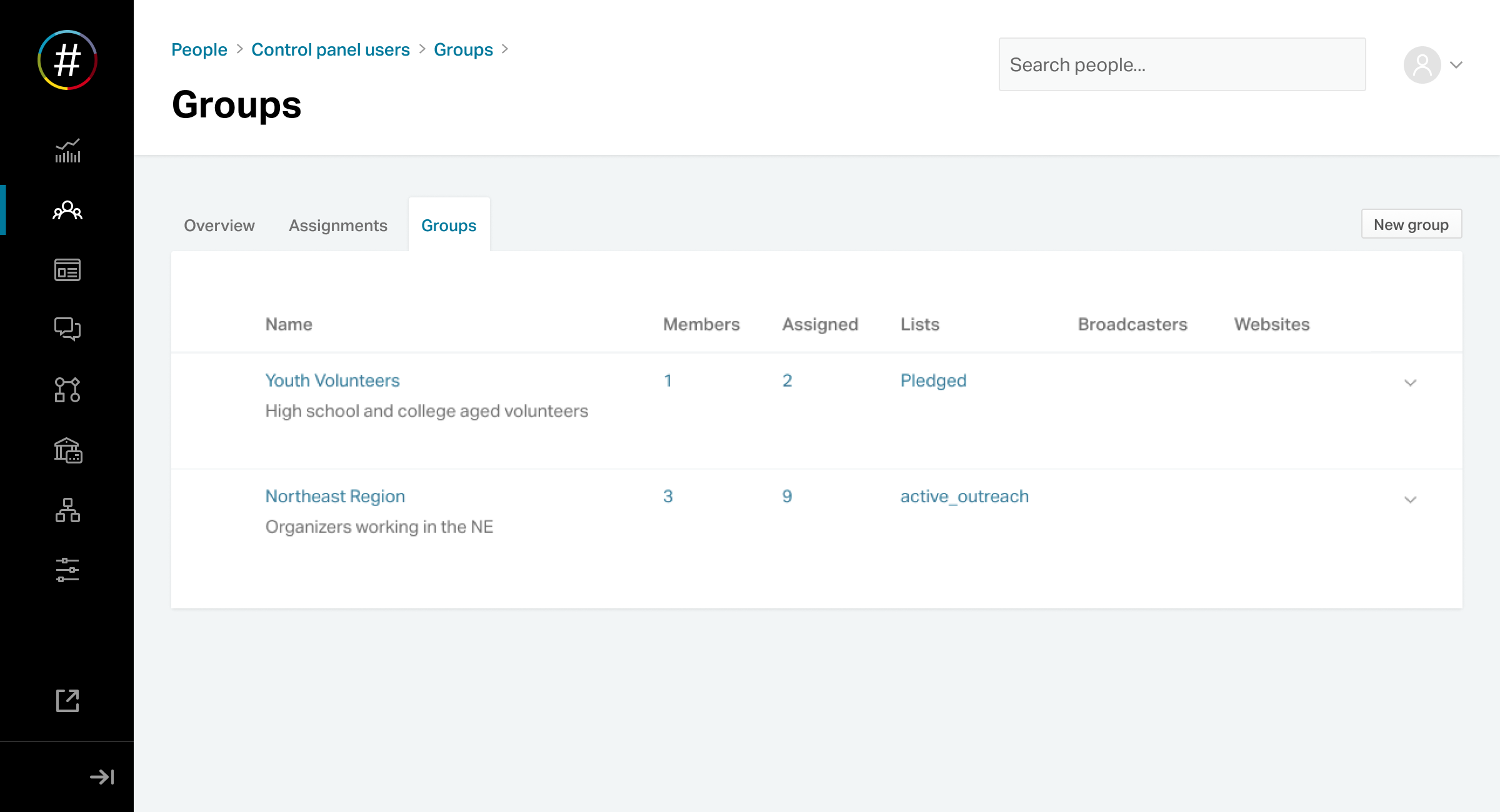 When a person in the People section is on a list that is assigned to a particular group, the group will appear in their profile under their name, contact info, membership status, etc.

Groups can also be used to restrict management of a particular website to one or more groups of control panel users. Previously, anyone who had website permissions was able to exercise those permission on any website in the nation. To help solve this problem, we’ve added an “assignment” dropdown in the Website permission settings, similar to the one that already existed for People.

When a user with “Assigned” website permissions is a member of a group that is assigned to a website, they’ll be able to edit that website (if they have permissions to edit websites), but they won’t be able to access any other websites in the nation. This allows for a specific chapter, branch, or IT team to cordon off access to specific websites depending on that persons
group membership. 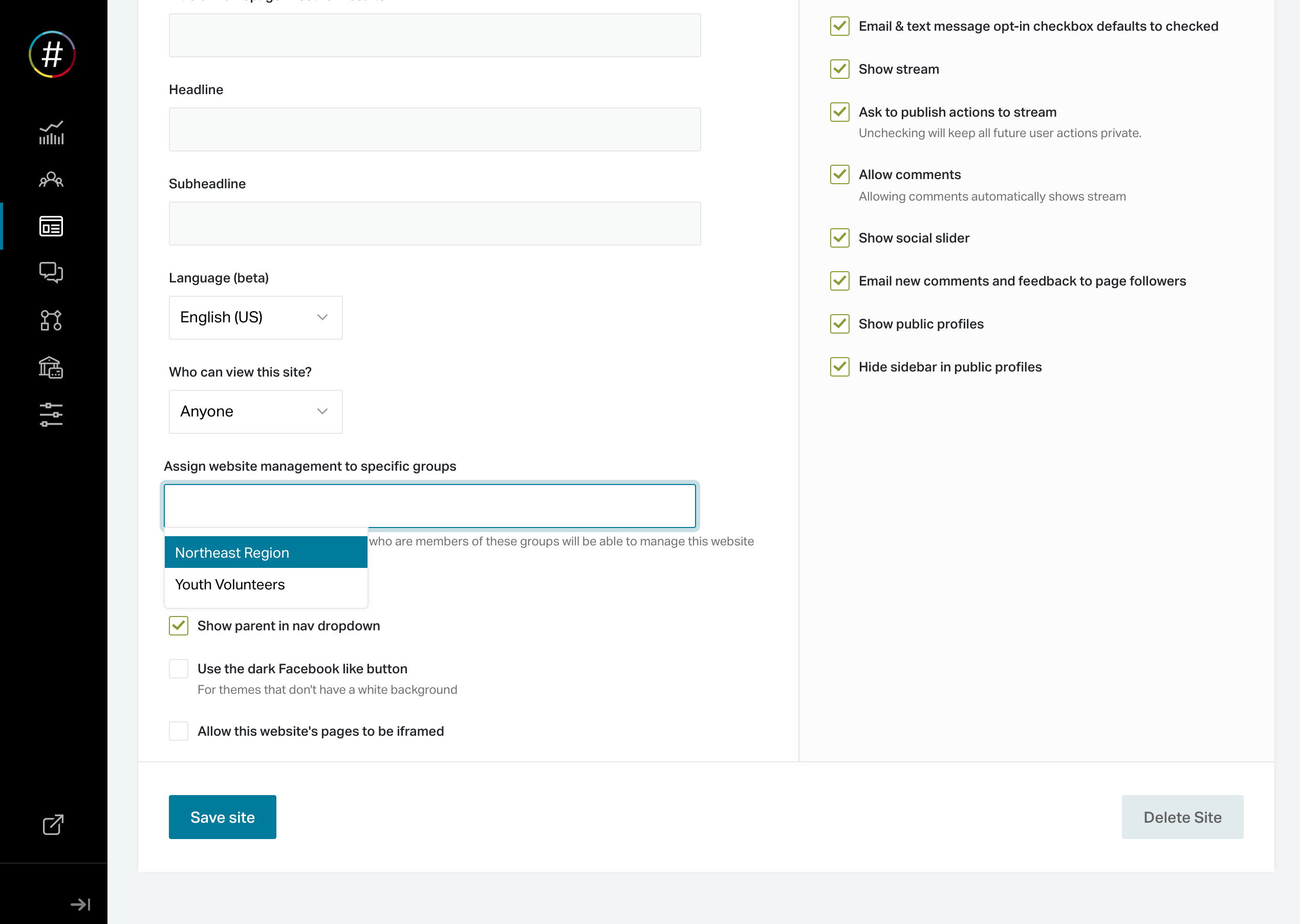 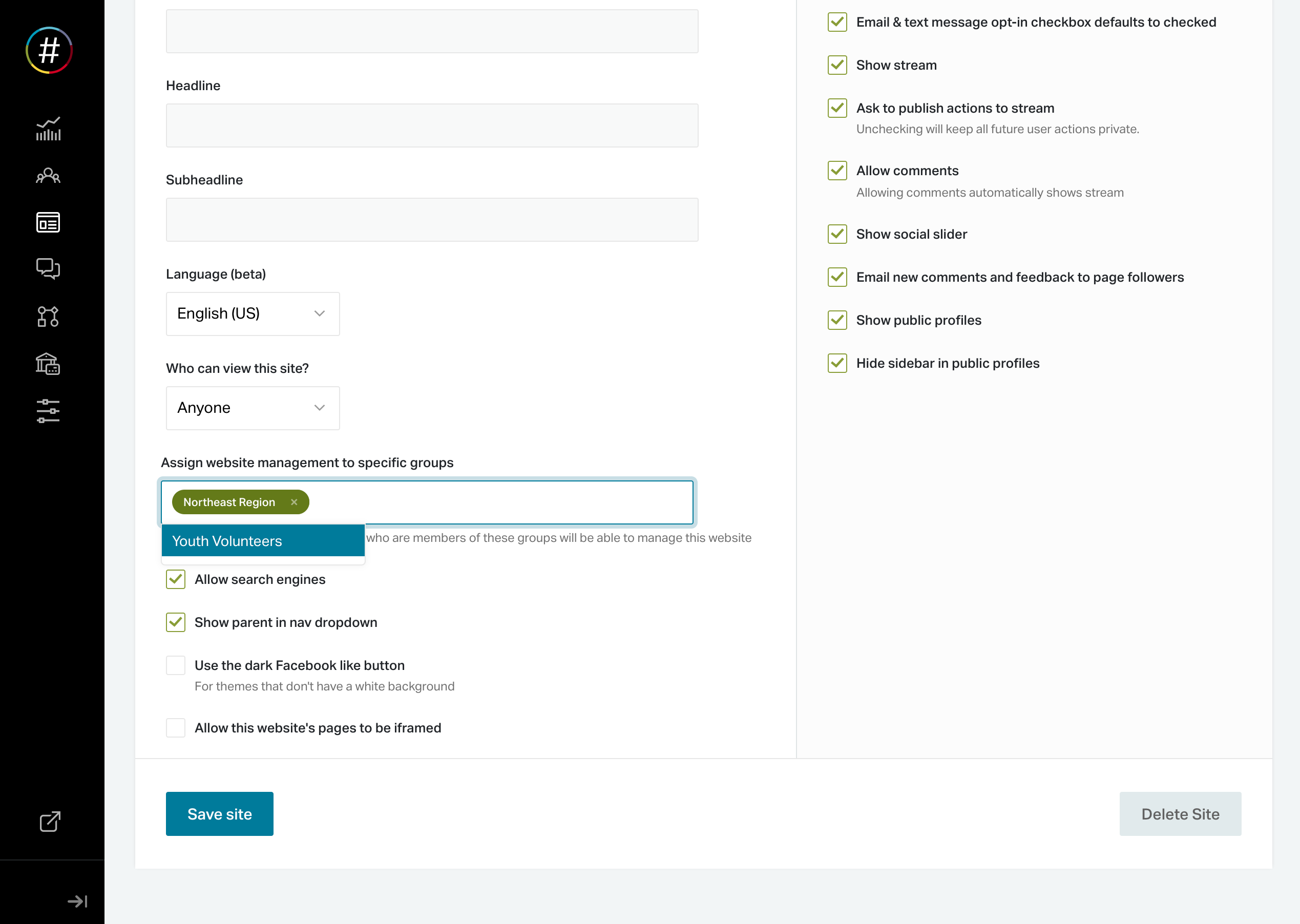 The tab named “Point People” in the People section of NationBuilder has been changed to “Control Panel Users”. 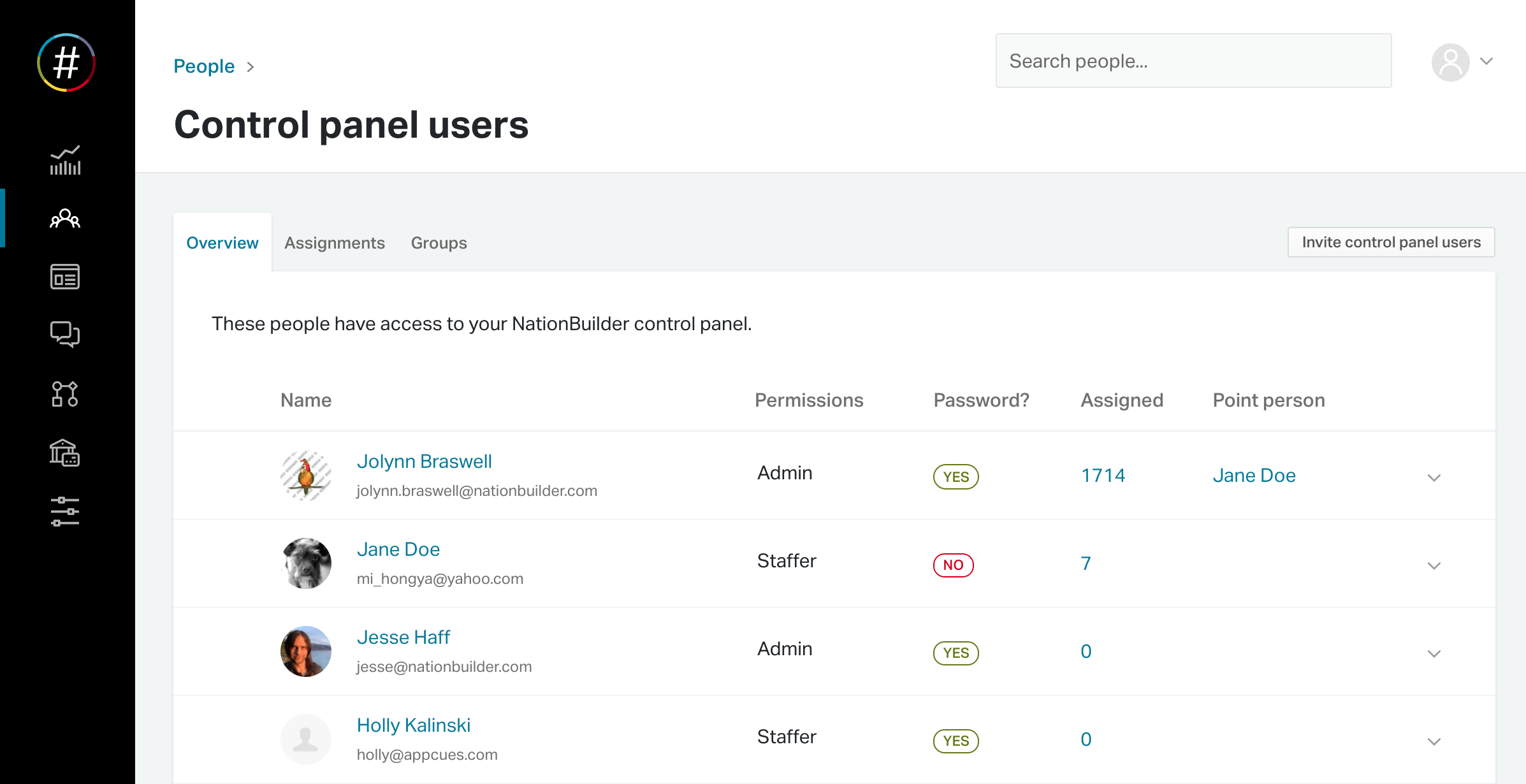 While every Control Panel User (CPU) is eligible to be the Point Person of a supporter in the nation, not every CPU is a point person. This updated tab shows the same information as the former Point People tab, and introduces a new button to “Invite control panel users” directly from this view.

This button surfaces the same “invite” form as described in our Managing Control Panel Users documentation, with the addition of a new “Add to groups” Field that allows a new control panel user to be added to a group when they’re created. 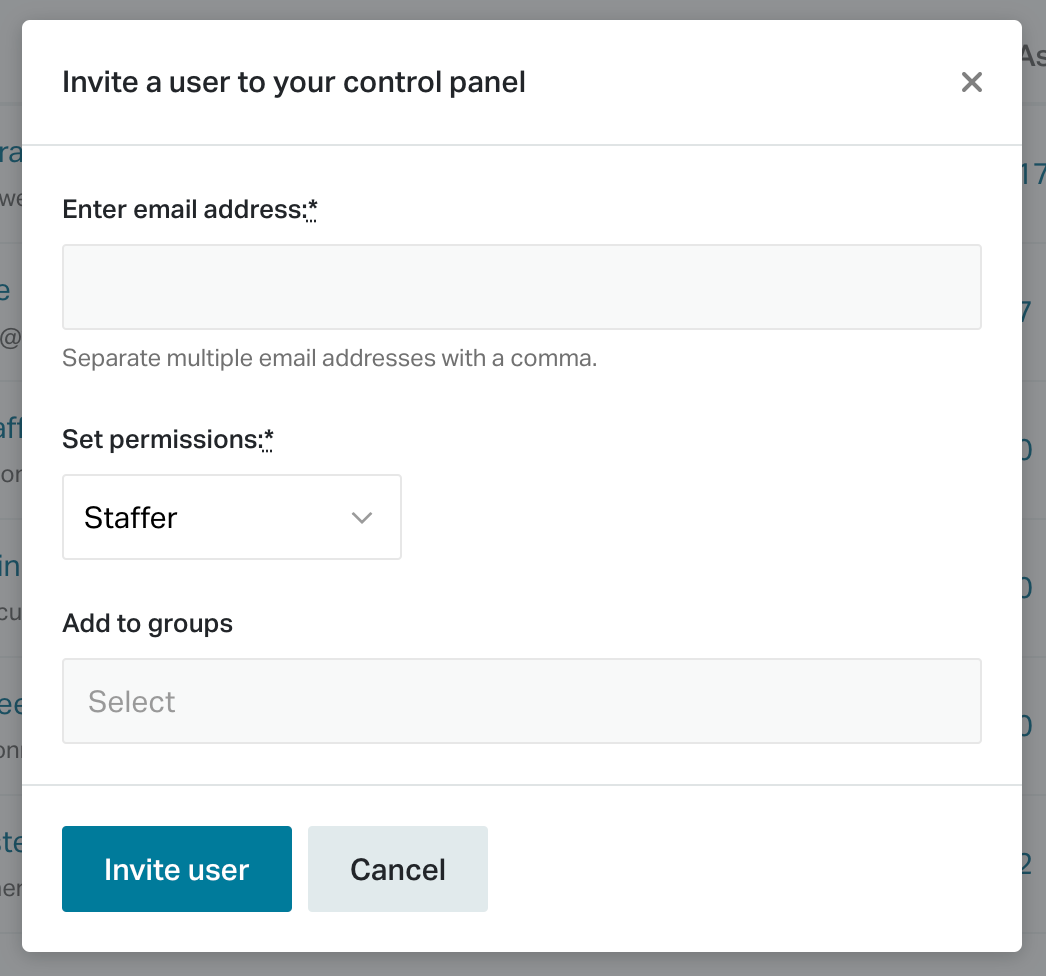