All Collections
Workflows
Running a Workflow

The ins and outs of running, pausing, or ending an automation.

Written by Erika Avellaneda Celis
Updated over a week ago

📌 Note: Additional automations are available as add-ons. For more information on adding new features please see the add-ons page in your nation.

Once you're ready to set your automation live — i.e., send the first email and schedule the remaining emails — click the Run button in the top right. You'll be prompted to confirm before the first email is sent. If you're using a List as the source of an automation, your modal will look like this: 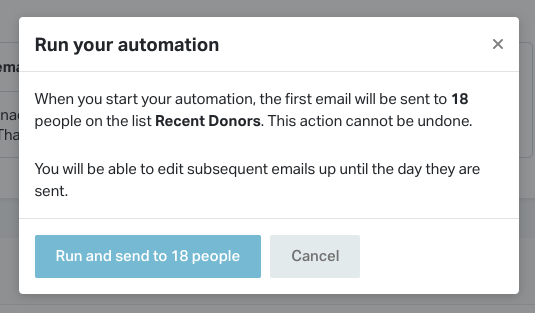 Once you confirm, the first email will go out, with the others will be sent out according to the time delay you defined.

If you've selected a page as the source of your automation, the modal will look like this: 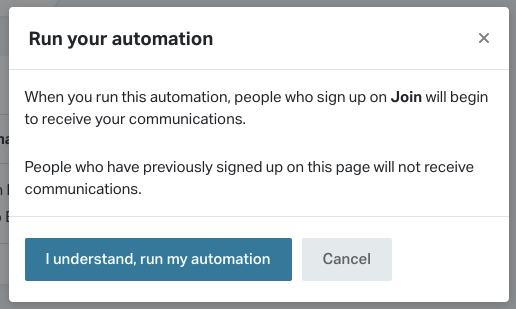 Once you confirm, anyone who signs up on the page will be added to the automation.

You'll notice that there is now an indicator that the automation is running, and the Run button has changed to Pause:

Once emails have been sent as part of the automation, you can navigate to the Email results tab to see engagement metrics for your emails as that data comes in:

And, back on the Workflows dashboard, you'll see your running automation listed:

Pause and resume an automation

Once an automation has been Run, you will have the ability to Pause it. Pausing will prevent the following scheduled emails in the automation from being sent. After clicking Pause, you'll be prompted to confirm:

Once you do, with a list as the source, there will be a yellow Paused indicator that will be displayed where your automation paused. The Pause button will now display the option to Resume:

With a list as the source of an automation, upon clicking Resume, you'll be shown when the next email will be sent, and asked to confirm: 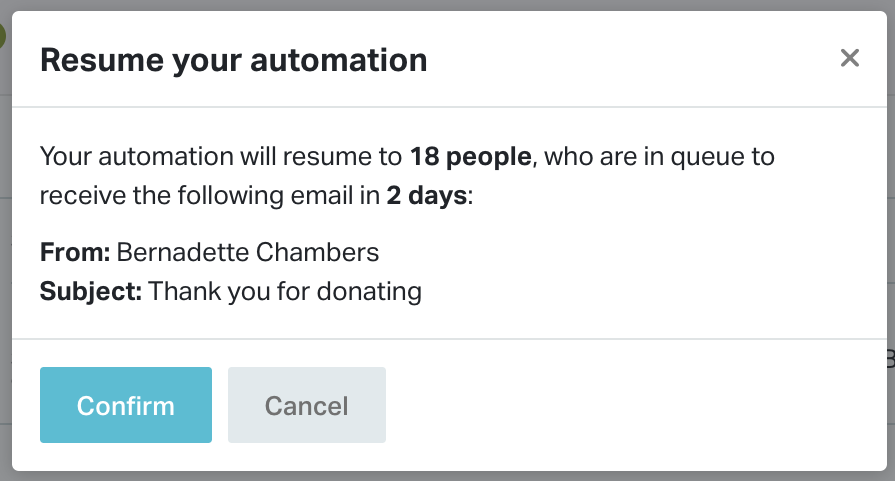 While the automation is paused, you will be able to edit the "time delay" for that email to change when it will be sent once you resume.

With a page as the source of the automation, new people who sign up on the page while the automation is paused will be held in a queue:

When you resume, you'll be prompted to confirm that everyone should be included:

With a list as a source, once every person on the list has received every email in the automation, the automation will automatically be moved to the Ended status.

With a page as a source, the automation must be ended manually:

Once an automation has ended, roll-up information about the automation will be displayed:

Once an automation has been ended, it cannot be run again (we are exploring options for cloning or re-using automations in the future).