Virtual currency (aka social capital) can be used to measure the effort a supporter devotes to achieving your goals.

Written by Kev O'Connor
Updated over a week ago

Virtual currency (aka social capital) can be used to measure the effort a supporter devotes to achieving your goals, as well as the effort needed to build the relationship with that supporter.

It can be used to:

Using capital is most effective when you clearly define your goals, identify how people help you achieve those goals, and assign capital to those actions. Thus, a supporter’s capital balance reflects their contribution to achieving the nation’s goals.

Publicize social capital information using political capital and leaderboard pages on your website. Using these pages, it can help validate and motivate supporters.

Change the name of your currency

Rename your currency at Settings > Nation Defaults > Social capital. If you cannot see the Settings section of your control panel, please contact a nation admin for help.

1. Type the new name in the “Rename your currency” textbox. This is the singular form of the currency. For example, “Kevin earned one cool point”.

2. The next text box asks for a plural version of the name. For example, “Kevin earned three cool points.” The field is required even if the name is the same for singular and plural.

3. Select an abbreviation for your currency. This abbreviation appears throughout your nation including in profiles and leaderboards.

If you rename your currency, the new name will be reflected throughout your control panel. The title and headline for existing political capital pages will need to be updated to reflect the new name.

While control panel users can manually add or remove capital from a profile, capital can also be awarded automatically for actions taken. These automatic adjustments are managed at Settings > Defaults > Social capital.

1. Find the action you wish to adjust in the list of actions at the bottom of the page. Hover over and click Edit next to the action.

2. Enter set amounts for the signup, author, or recruiter in the three boxes indicated. To award capital, enter an number higher than 0.00. To remove capital from a profile, include a negative sign before the number.

3. If you wish to apply these adjustments to past activities keep the checkbox selected.

The most common actions have default social capital values associated with them. The table below describes how profiles are affected by actions taken. Signup (S), author (A), and recruiter (R) do not exist for every action. Awarding or removing capital using a percentage (%) of a profile’s balance is limited.

Note that some actions have a counter action. An equal amount of capital should be awarded for the positive action that is removed for the negative action. For example, award 10sc for making a donation and deduct 10sc if the donation is canceled. In this way, the balance will be zero to show that the action was nullified.

Capital can be awarded for the following actions: 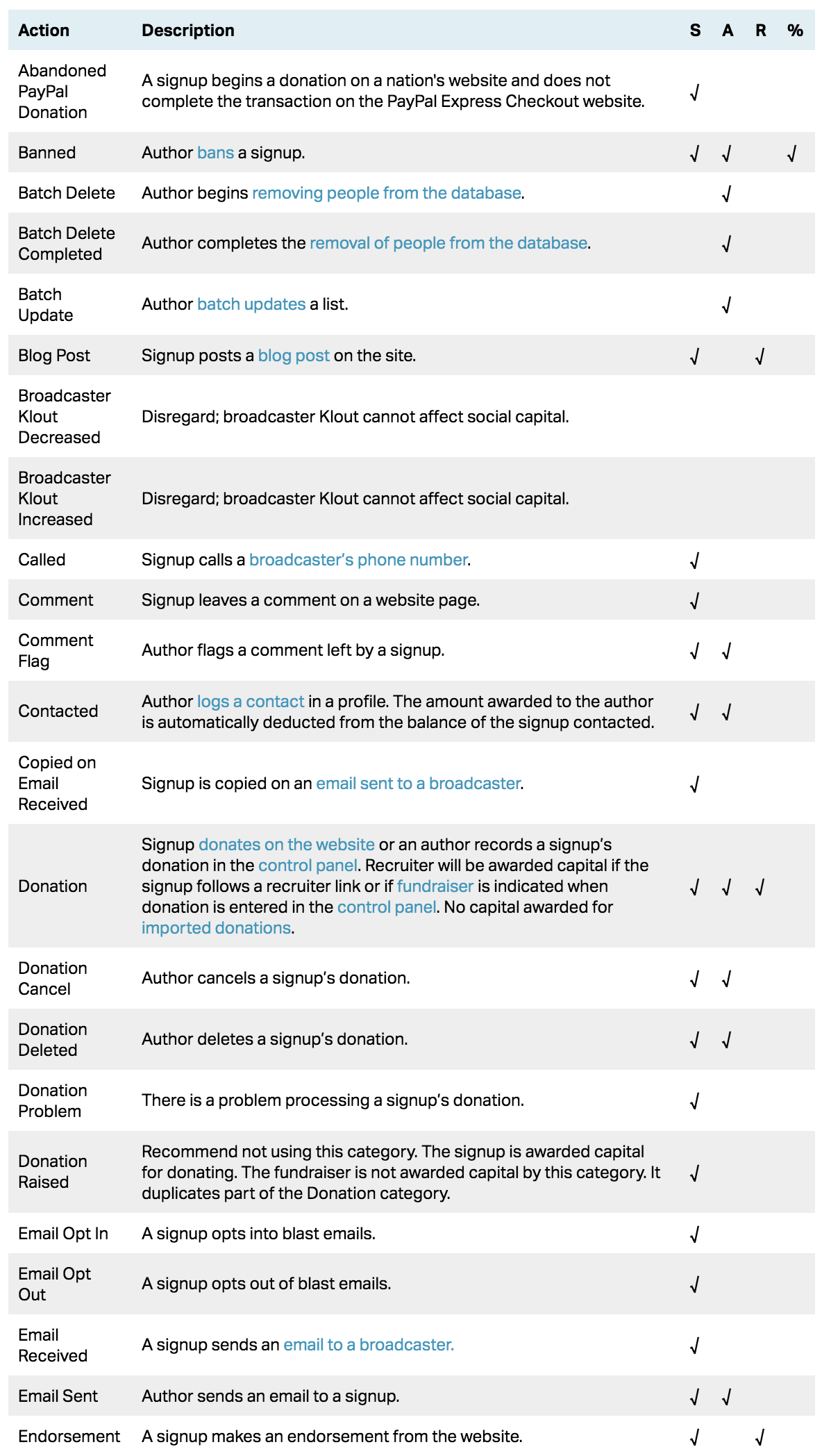 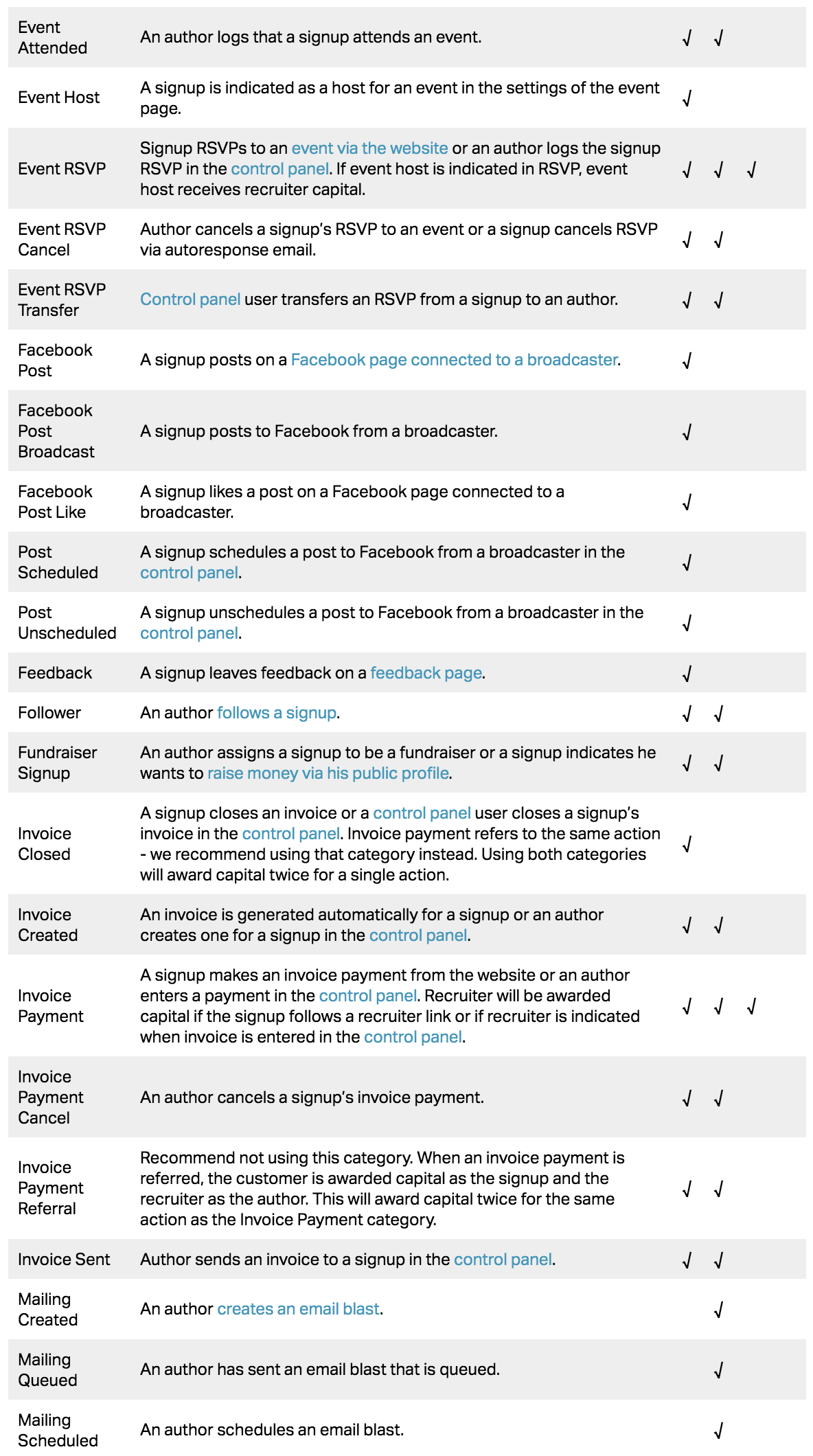 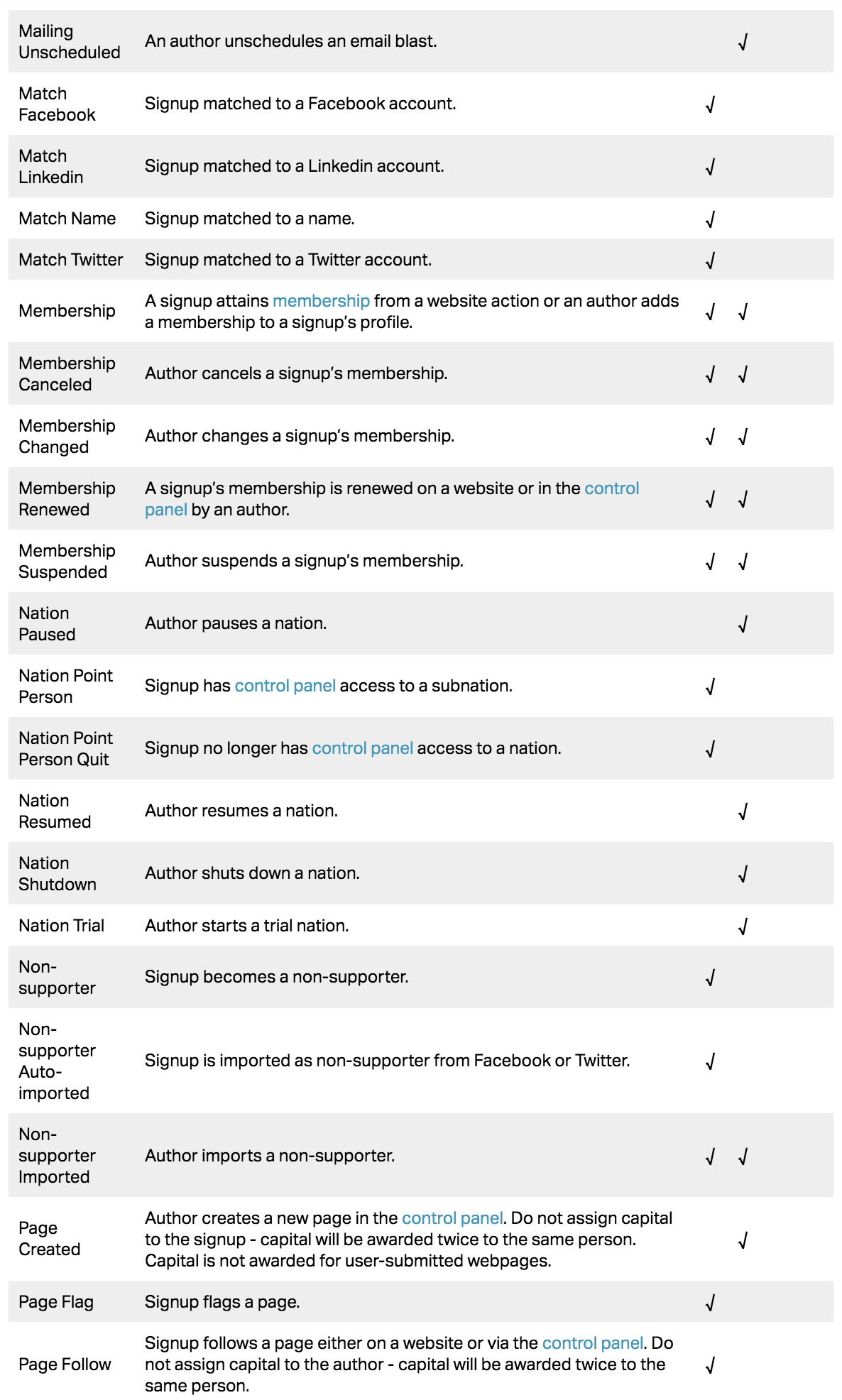 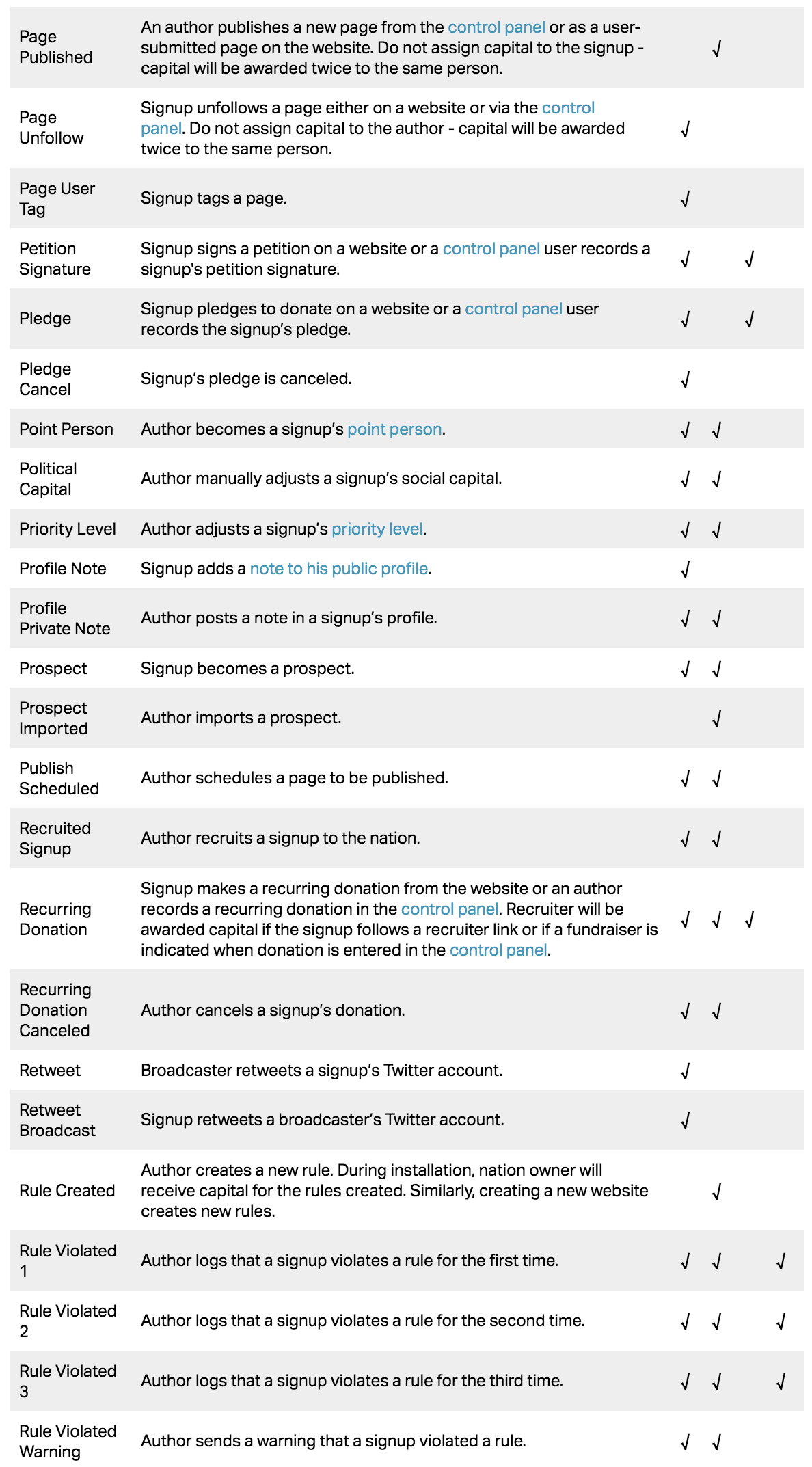 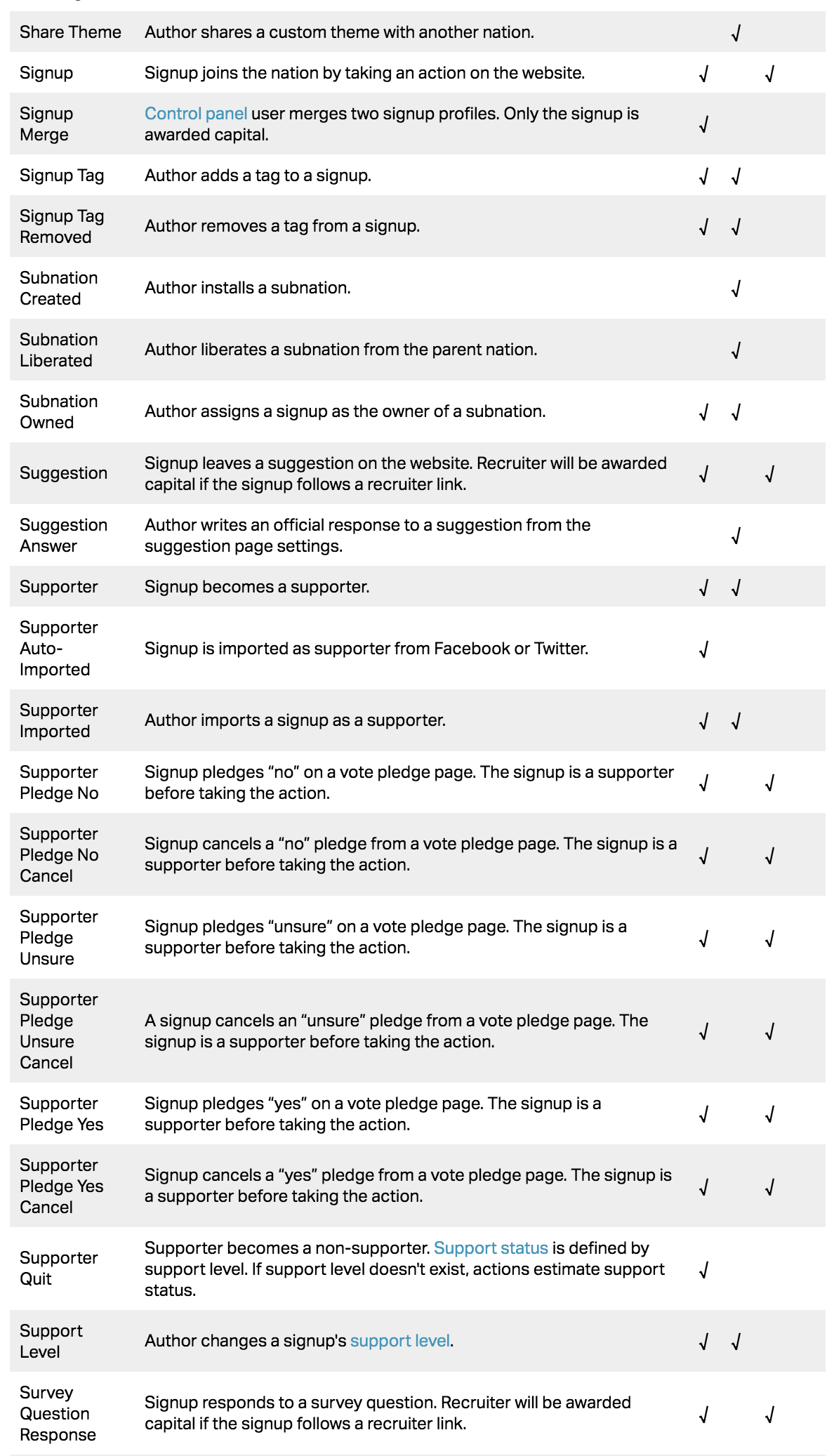 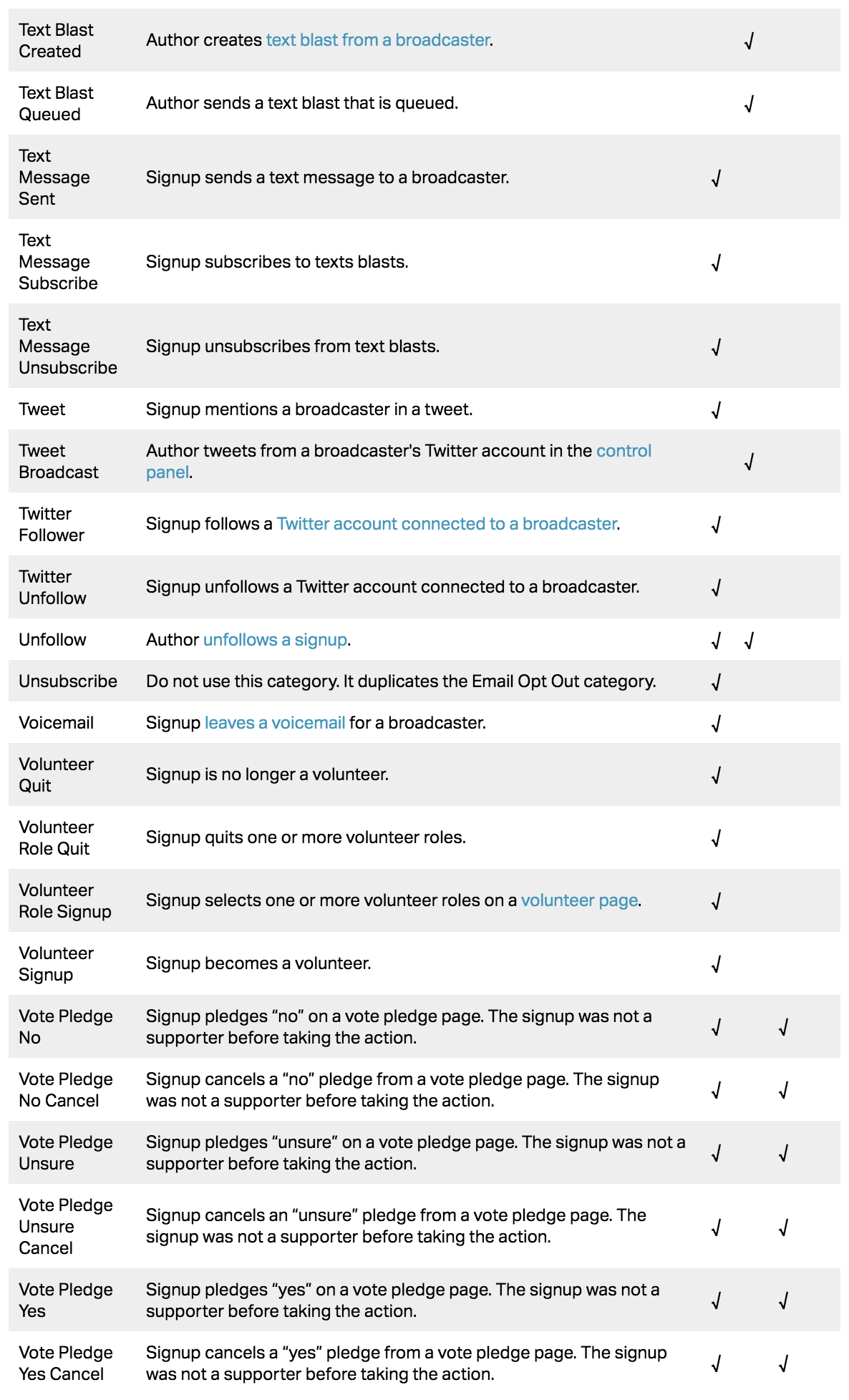 Using social capital as a measure of supporter engagement

When we look at a large nation that has an ample amount of supporter interactions, we can start to identify which supporters are contributing the most ‘Engagement Above Average’ (so to speak).

We can establish a baseline for supporters in a nation as being worth 5SC (NationBuilder’s default for someone who has signed up but not taken any other actions). So if a supporter has 200SC, we know they’re contributing 195SC above our baseline. There are a number of ways that this can be helpful when organizing with NationBuilder.

Rather than using SC solely as a tool for encouraging engagement and competition, we should step back a bit and also remember its use as a tool of analysis. SC can be set up to tell us very useful things about a supporter all in one quick glance, and we can use this info to determine potentially deeper and more exciting ways to involve people in our Nations.